Ironclads in the Adriatic 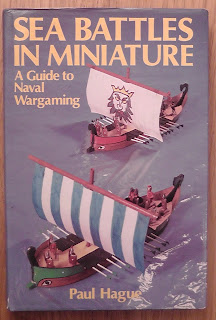 The rules are rather simple but I like to think of them as the naval equivalent of Brigadier Young's Charge! or Donald Featherstone's rules that 'classic' wargamers are understandably fond of.  Furthermore, the ship designs included within the book for scratch-building are also rather stylised (although based on Fred T Jane's drawings), which fits with the simplicity of the rules. Nothing wrong with that (it makes them easier to construct for one thing) although my ships are nowhere near as fine as this chap's.  Speaking of which, here are a couple of merchantmen I made this weekend for this week's scenario.  They are about 90mm long.

Hulls are balsa and the white bits of superstructure are pieces of polystyrene pizza-base, shaped to fit.  Add some cardboard hatch covers, match-stick funnels and pins for masts and voilà!

And here you go, a basic paint job as is befitting.  One or two other things to make but these shouldn't take long.  By the way, I can't tell you more about the planned scenario as I don't want Geoff to know what he's up against until he gets here....
The Wishful Wargamer at 20:25
Share