As promised in my previous post, here is the tembe I made.  For those of you who don't know, and I didn't until last week, a tembe is a square African building used by nineteenth century Zanzibar slavers and such like. 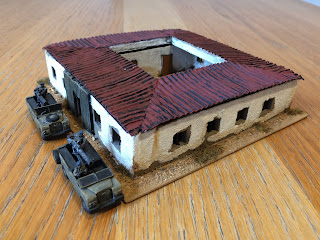 Apparently the name indicates its intrinsic squareness as opposed to the normal round huts that everyone lived in during that period (and still do, in some places, as I have seen for myself in Uganda). 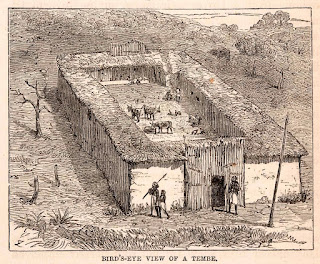 Such buildings were used to keep the slaves in (and to stop other slavers stealing them) before shipping them off to wherever they were sold to. 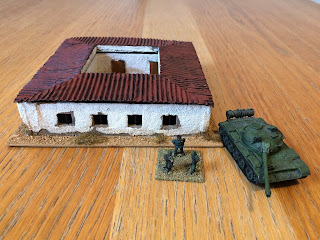 The inspiration for building this (in 15mm scale) was the recent article in Wargames Illustrated magazine (No. 356), where a 28mm building was showcased.  The version featured was made of mdf and had a thatched roof. 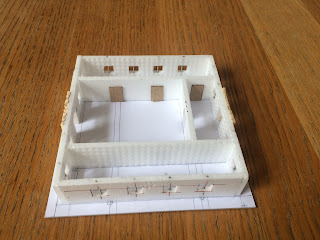 However, it struck me that a tembe could have a variety of uses in various periods and locations including ancient near east (as a villa), nineteenth century Mexico (a hacienda) and of course modern Africa, to complement my Peter Pig AK47 armies (as a police station, customs post, or similar).

From the African angle my reasoning was that the building may have been an old tembe that had had a new roof added, which is why I changed the roof to what could be interpreted as tiles (or corrugated iron) instead of thatch. 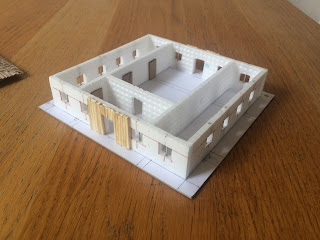 Construction was my usual pizza-base polystyrene 'foamboard' stuck to a cardboard base.  The roof was made from corrugated cardboard; actually the cardboard insulating sleeves that you can pick up with take-away coffee. 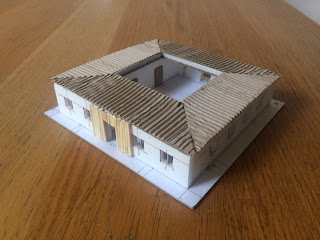 Around the doors I stuck on matches to represent a timber finish and bars were put on the windows.  These were actually cut from some thick wire - the low 'E' string I'd removed from my electric guitar (a beautiful 'Artists' Series' Ibanez AR420-VLS) when I changed the strings recently.
﻿
For this model (the tembe, not the guitar) I made the roof removable.  This was then undercoated in black and roughly painted with a rusty terracotta colour.  All of the walls were painted in the chocolatey brown colour I normaly use and then coated in PVA glue and covered in fine sand. The floor of the courtyard and the surrounding ground were done in a coarser shelly sand I use for basing figures. 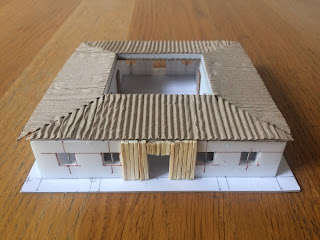 The sanded walls were then painted off-white with smoother areas left the undercoat colour, as though the plaster had fallen off in places. Walls were dirtied up with various washes of dark earth.  Interior rooms were painted black. 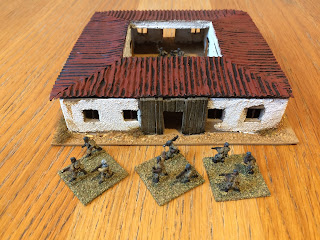 The ground was painted a sand colour with some static grass (recently acquired from WWS) added.  Overall, I was pleased how this turned out, as well as its potential versatility for various periods as mentioned earlier.
Posted by The Wishful Wargamer at 18:40 5 comments:

As always seems to be the case, I have multiple projects on the go at the same time, hardly ever finishing any of them completely.  This usually happens when I have figures to paint and then I come up with a displacement activity instead.  I don't know why because when I get going I actually enjoy painting figures.  Anyway, this week it has been making/ refurbishing buildings for various things. 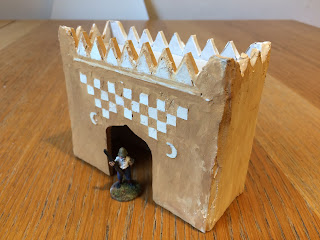 This post is about the 'Indian Mutiny' buildings that I have been working on.  This has been in response to dangerous talk with Geoff about him getting his old Foundry figures out again for some skirmish games using the WRG's Fire and Steel rules. 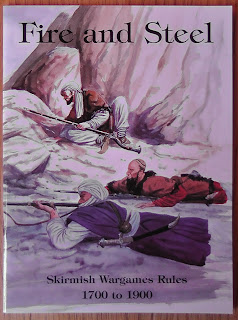 To contribute to this initiative, I dug out the old buildings I had in the box and repaired, refurbished and touched up the paint on them a bit. 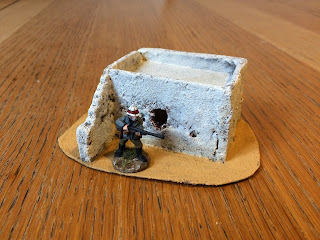 I don't have any Indian Mutiny figures so have illustrated them with some 28mm Copplestone explorers instead. 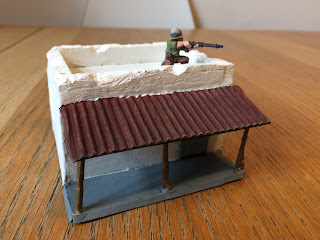 In addition, I added a new building, made in my usual way from polystyrene foam pizza base (poor man's foamboard) and cardboard.  I just stick everything together with wood glue (PVA), scoring the polystyrene edges as neccesary to enhance adhesion. 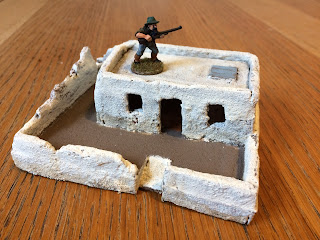 The idea was to make a slightly larger building with some steps up the side and flat roofs for figures to stand on.  As with most of the buildings I make these days I don't make them enterable, which means they are more robust as I can just glue everything together (and don't have to paint the inside). 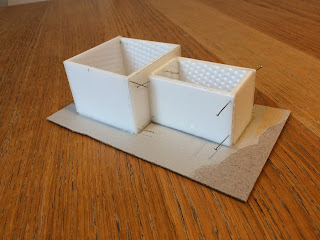 As you can see, the offcuts of cardboard I stuck on the outside make the walls more uneven, implying some extra strengthening, rather than being the flat slabs they would be otherwise. 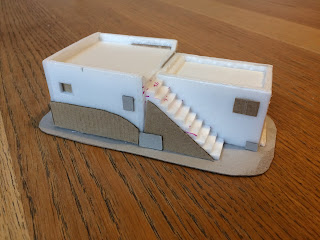 After construction was finished I painted all surfaces with some tester-pot emulsion paint I'd picked up years ago.  It's called 'Fired Earth' and is a sort of milk chocolate colour (used here for example).  After that I coated everything with wood glue and dipped the building in a large tin of fine sand I have.  I undercoat first and then do the sand texturing afterwards because the wood glue sometimes doesn't spread evenly over the smooth polystyrene. 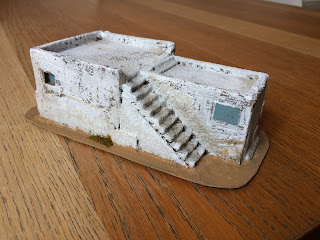 Walls were then roughly painted in some off-white emulsion and then dirtied up with various washes of Revell Dark Earth. 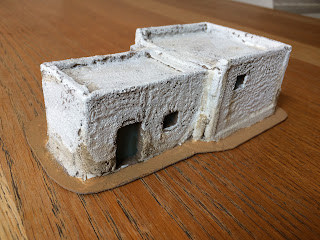 Finally some static grass and small bits of my home-made clump foliage were added. 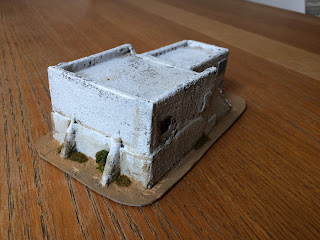 The thing about buildings though is that I never seem to make them one at a time, preferring a sort of batch process.  A back-up displacement activity perhaps.

In this case I made some similar 15mm structures intended for ancient (DBM), modern Africa (AK47) and/or possibly mid-nineteenth century Mexico for the Maximilian Adventure (not that I have any figures for that, yet). 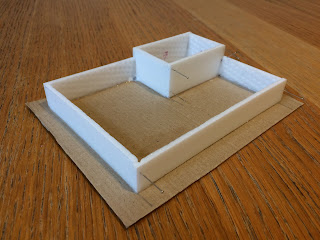 I'll post about that lot when I've actually finished them, plus today I saw an interesting article about building a Zanzibar slavers' tembe in this month's edition of Wargames Illustrated (No.356), which I am finding difficult to resist...
Posted by The Wishful Wargamer at 13:32 2 comments: