ACW Adventures in Basing No. 9

A very long time ago (2012 to be exact), I did a post featuring a box and some unpainted sprues of 1:72 Italeri ACW Union Cavalry, promising to get on with them ASAP.  The good news is that I have now finally finished and based them. 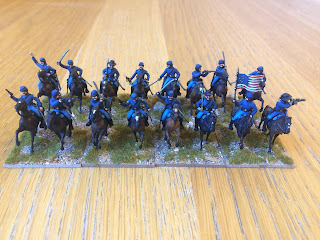 These are very nice figures and being a slightly stiffer type of plastic hold the paint very well.  It doesn't come out clearly in the photos but I painted these using a two stage tone system, i.e. after a thorough black undercoating I did the base coat colours (mainly from an old but trusty pot of Revell 5077 blue - which I use for painting Napoleonic French as well) and then some highlights with a slightly lighter blue.  It's the same system as I use for 15mm figures. 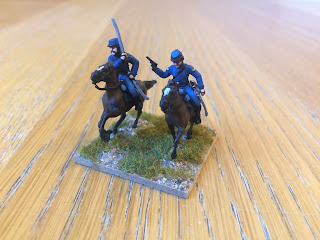 Faces were done using a 'rust' coloured base (Revell 37 Reddish Brown) and then flesh colour daubed in four places: on the cheeks, nose and chin. 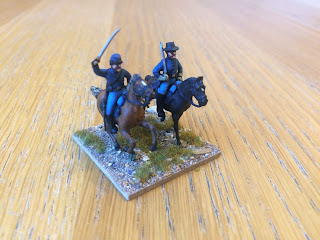 Horses were initially painted in various shades of brown (e.g. Revell 85 Braun, and some in darker browns).  Thin black wash was then applied to each horse's face, manes, tail, legs and underparts in layers generally to build up the contrast and create variation across the animal.  Tackle was painted black afterwards. 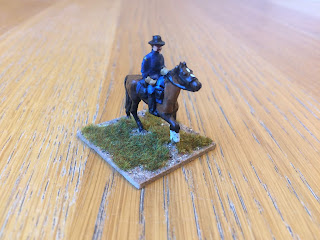 Finally, I needed to upgrade my generals, which are very old plastic Spencer Smith figures (technically 40mm I think).  I stripped these down from their flat mid 1980s' paint job and removed the mould lines properly this time.  After painting, all figures were varnished using Windsor & Newton "Galeria" acrylic matt varnish, as recommended by a couple of people on the TMP forums. 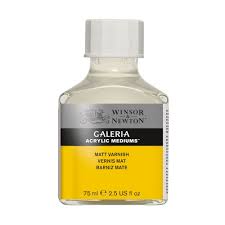 Basing was my usually coarse shelly sand on MDF bases, with added static grass.  For some reason I never painted the sand on earlier ACW figures I'd based, so I kept with tradition on these ones.

So, remarkably, that's pretty much all of my ACW figures painted.  The only thing I might need is some dismounted replacements for the cavalry, but they feature so rarely in our games (when we have ACW games) that they're not even on my list of things to do.
Posted by The Wishful Wargamer at 10:29

They look really good. The Varnish. How Long does it take to dry?

Thanks. The photos don't really show the shading very well (need a better camera; the iPhone doesn't cut it). Regarding the varnish, it's pretty quick, being acrylic (water based) - much like acrylic paints. Best thing is to apply very thin coats though. If it is too thick then it does have a slight sheen (which doesn't really bother me). Cheers WW