Right lads, I'm back.  It's only been a year.  But of course I've never been away (few of us have).  But oddly with all that extra time stuck at home I've done far less wargaming related things than I would normally do in a similar twelvemonth.

Anyway, here, finally, is the after action report (AAR) of what was the next game in our (now) extremely long running One Hour Wargame campaign.  In fact this game was played at the start of March 2020, a week or so before the first Covid-19 pandemic lockdown.

As I pointed out in the previous AAR from this campaign, the varied scenarios in Neil Thomas' book are often inspired by classic scenarios published by others, with the playing area reduced to 3' by 3' and with simplified terrain layouts. 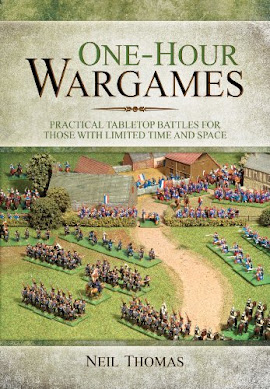 However, what we did find from playing the previous games was there often wasn't enough terrain on the table to make things interesting for our tastes, although this is possibly because we usually play on our 6' by 4' boards, so everything is a bit diluted.  That said, I do like a bit of granularity, where specific features like buildings, stone walls, woods and marshes do have a significant effect on battle outcomes, as they very often did in real life. 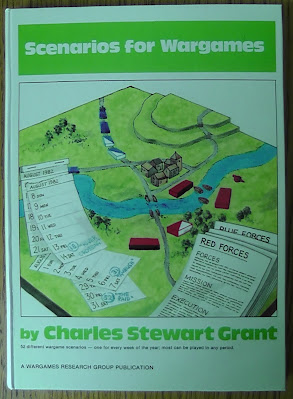 Therefore, reading the OHW blurb for this scenario, CS Grant's scenario Flank Attack (2) was referenced as an inspiration, and looking at the original it was clear that a more interesting table could be set up using his map, rather than the one in OHW.  Anyway, long story short, this is what our table looked like at set up.

Both scenario descriptions explain that the defending force should be deployed expecting a frontal attack, but in fact there is a "surprise" flank attack in the offing.  For our game, troops were deployed complying with the requirements of the CS Grant scenario.

Also for this campaign game we used Geoff's 15mm Renaissance figures for the first time.  These comprise a mixture of Roundway (which seems to have disappered), Alternative Armies, Essex (?) and possibly others.  The AA figures are apparently ex-Tabletop Games (now defunct), although they are adding to the range all the time.

Anyway, here are some selected photos from the game.  I'm not going to do a detailed blow-by-blow account of the action because it's so long ago I can't remember exactly what happened.

However, basically, to cut a long story short, the Imperials commanded by Geoff sure enough attacked through the woods on the Venetian's left (surprise!), and after a bit of struggle I was eventually pushed off the ridge and he won.

What I do remember is that most of the fight happened on my left flank as one might expect.  With only some LH, a unit of crossbows and one pike block (with some artillery in the wrong place) it should have been easy for the Imperials.  And sure enough, right off the bat, my LH decided to withdraw under light artillery fire.

Geoff's cuirassiers then moved up to engage my pikes, whilst his pikes advanced to threaten my crossbows.  At first it went well, my pikes managed to defeat the cuirassiers and my crossbows remarkable held off Geoff's pikes for a couple of moves through accurate fire and then, remarkably, in hand to hand combat.

My pikes could then move forward to engage the enemy pikes.  But more pike blocks were streaming through the woods.

Meanwhile, my strongest troops, inconveniently posted on my right, started to move into the centre, to try to get into the action.  Somewhat slow progress ensued.

Things were not going well.  There was hard fighting on my left and more enemy pike blocks were moving up, eventually sweeping away my crossbows.  This left my only pike unit on the hill somewhat isolated.

With the demise of my crossbows the enemy was able to get onto the hill, with further reinforcements on the way.

Meanwhile in the centre I was getting bogged down with little chance of being able to relieve my crumbling left flank.

Eventually it was all over, with the enemy on the ridge and without much chance of me getting it back.  A win for Geoff.

The rules we used were Furioso by Alternative Armies.  I didn't warm to them at first because I wasn't familiar with them (so was perpetually confused about certain mechanisms) and I'm not that keen on rules that use buckets of dice (or that need chits put onto the table).

That said, I have since bought a pdf copy and have actually read them so now understand a bit better what was supposed to have been going on.  Always useful to understand the rules properly before starting a wargame...

One final thought is that having a specific objective is so important in wargames.  In the old days we used to just set up our armies opposite each other and fight it out until one or other of us held the field.

I mean defeating the enemy directly in battle is a valid objective, but the importance of terrain and strategic features to fight for makes a game a lot more interesting.  Hopefully the next (and final) game in this campaign (OHW #15 or #19) ticks those boxes.

Posted by The Wishful Wargamer at 13:26